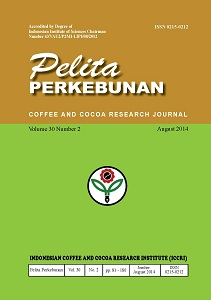 Development of Robusta coffee clones needs special characteristics for rootstock. This research was aimed to study the characteristics of cutting growth of Robusta coffee as influenced by genetic factor. The research was conducted at Indonesian Coffee and Cocoa Research Institute using 269 progenies originated from reciprocal crossing populations among three parentals, namely BP 409, BP 961, and Q 121. BP 308 an easy cutting-propagated genotype was used as control. The research was arranged in three replications of randomized completely block design with 10 cuttings per replication. Each cutting was single planted in plastic polybag of 15 cm x 25 cm without any growth-regulator treatment. Cluster analysis procedure showed root growth characteristics which could be divided into three groups namely easy (85.3%, 3.82 and 6.68 cm), moderate (57.6%, 1.73 and 4.01 cm) and difficult (25.1%, 0.58 dan 1.44 cm) based on proportion of rooted cuttings, number of primary root and length of root, respectively. On the other side, growth of sprout showed good homogenous characteristic, mainly indicated by proportion of sprouted cuttings which generally achieved up to 98% in average. Study on shoot-root ratio of cuttings resulted in two groups of progenies, namely the first which tended to be dominant on sprout growth and the second which tended to balance their root and sprout growth. Based on proportion of sprouted cuttings which almost achieved up to 100% and various proportion of rooted cutting, it could be indicated that growth of cuttings was started and dominated by the growth of sprout. Key words: Coffee canephora, progeny, genetic variation, cutting, rooting, sprouting

This work is licensed under a Creative Commons Attribution-NonCommercial 4.0 International License.

Authors who publish with this journal agree to the following terms:

Most read articles by the same author(s)